Emergence of the Missionary Department 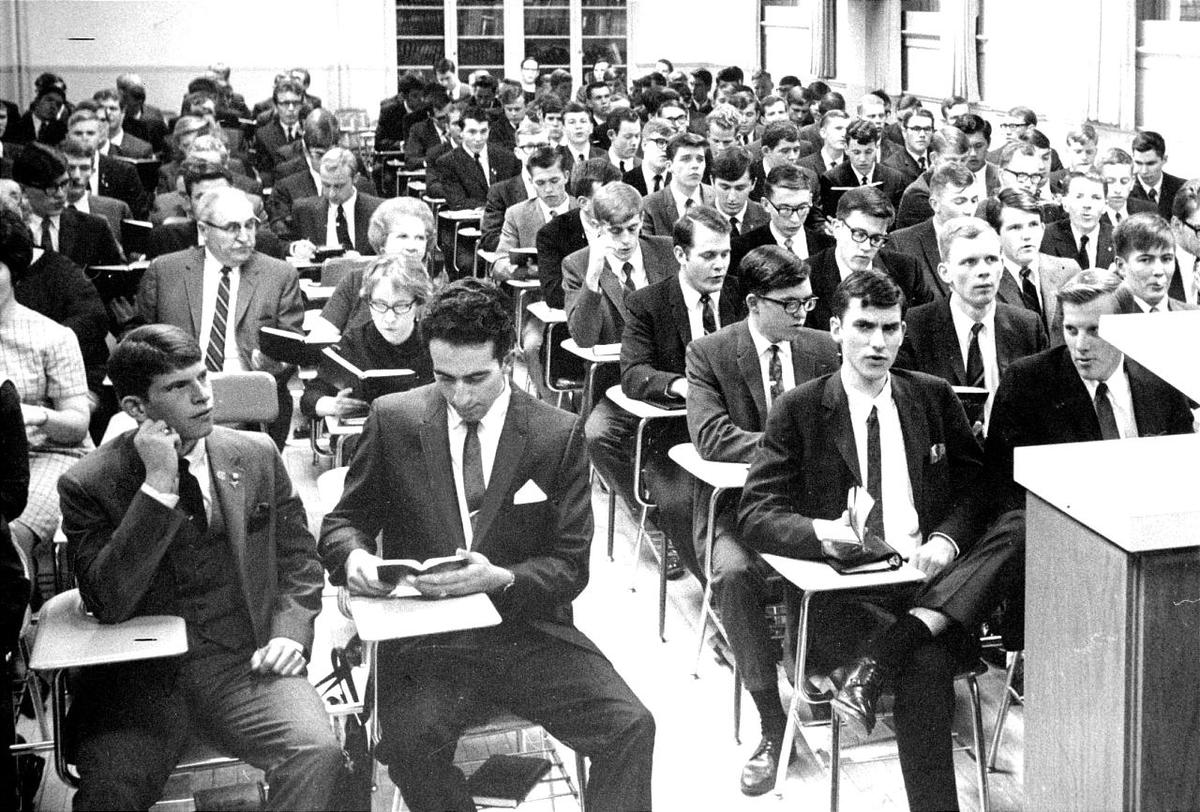 In the United States, perhaps the most recognizable image of the Latter-day Saint movement is that of the clean-cut, young, cheerful, door-knocking, bike-riding missionary. The church sponsoring these missionaries maintains an enterprise of recruiting, training, and dispatching young adults, retirees, and other volunteers unlike any other institution in the world. Regular Latter-day Saints sustain a missionary movement out of proportion from their population, a corps of missionaries representing something on the order of 15 percent of the worldwide Christian missionary force.1 Missions touch virtually every congregation of the church and are managed by the Missionary Department headquartered in Salt Lake City. Despite such scope and activity, this department’s administrative history has yet to be written.

I have chipped away at such a project but have only preliminary notes. Still, knowing better the emergence of the Missionary Department helps to bring the rapid increase in missionary participation into perspective. In 1933, roughly 1,200 certified missionaries served in proselytizing areas—enough for one secretary to process their calls, travels, and releases.2 Thirty years later, that number had increased ten fold, and twenty years after that, it reached 30,000.3 Within that fifty-year surge, a single office in the Church Administration Building for interfacing with mission presidents and processing candidates for service expanded into a bustling department with dozens of professional staff. We tend to sense the international phenomenon that was the mid-20th-century missionary explosion in terms of ward and mission cultures sustaining young people on their many adventures. But the emergence of the Missionary Department lends another indicator of sudden missionary growth—that of bureaucratic complexity to keep pace with the spread of missions.

Where did the Missionary Department come from? As far as I can tell, its precursor was the Missionary Executive Committee, a group organized in 1900 at the suggestion of Apostle John W. Taylor. This group of three (Taylor, Francis M. Lyman, and Matthias F. Cowley) assumed the task of systematizing the church’s missions. Very soon, the committee recruited George Reynolds, the executive secretary of the First Presidency at the time, to handle all official correspondence in issuing mission calls, processing candidate acceptance letters, and arranging some missionary travel itineraries.4 As the rate of calls increased, Reynolds requested assistance, and President Joseph F. Smith called George’s son Harold G. Reynolds as an assistant secretary over missions.5 During the following General Conference in 1907, Andrew Jenson supposed the assembly of priesthood leaders constituted “a missionary department of the church,” but in practice, the “department” was the designation for Harold’s mailbox.6

In 1909, George Reynolds died, and Harold was formally called as Mission Secretary to the Church.7 He continued in this capacity, basically a one-man show for interfacing with mission presidents, until 1917 when the new Church Administration Building was completed and he occupied an office now labeled “Missionary Department.” He superintended all headquarters’ processing of missionaries without any support staff until his death in 1940. Seven years before his death, Harold once prided himself on knowing all 1,200 missionaries of the church by name.8

When young missionary Gordon B. Hinckley returned to Utah from having served in Great Britain in 1935, his friend and mentor Apostle Stephen L Richards interviewed him for a position as executive secretary to a new committee, the Radio, Publicity, and Mission Literature Committee. (Mission literature here did not mean curriculum for missionaries, but rather tracts and public relations pieces usually written and circulated by mission offices in the field.) The committee oversaw the development of the first Missionary’s Hand Book that set in writing policies and procedures for missionaries and mission presidents. The Twelve Apostles commissioned other subcommittees with various concerns related to the broader missionary effort.9

When Harold Reynolds passed away in 1940, Franklin J. Murdock filled the role of Church Mission Secretary, and notwithstanding the increasing productivity of the apostolic subcommittees, Murdock continued to assist in missionary and mission presidents’ travel and in reviewing candidate recommendations with the First Presidency and Missionary Executive Committee.10 Not until David O. McKay became president of the church in 1951 did these discrete groups combine into a single Missionary Committee. Murdock transitioned into an almost exclusive travel agent role while Hinckley secured budget to hire more staff and solidify a more permanent Missionary Department personnel at headquarters.11 When Murdock opened a third-party travel agency office in 1958, Hinckley remained effectively the Church Missionary Secretary, a role that lasted about two years until he was called as an apostle. Within five years of Hinckley’s call, the Missionary Executive Committee cycled through a few secretaries until finally employing Edwin (Ned) C. Winder long-term.12

By the time of Winder’s service, various staff members assisted in processing standardized application forms, a missionary vehicle program, medical deferments, mission president training and correspondence, proselytizing experiments, and reports from the field. Based on the array of correspondence sources I’ve reviewed, I would estimate the number of full department staff by 1970 to be about two dozen. Full-time missionaries numbered around 15,000.

The centralization of missionary work had existed since 1835 when the Quorum of the Twelve Apostles accepted the mandate to set in order the branches outside of Zion. Increased growth at the turn of the 20th century tested the routines of the Twelve and introduced a need for a systematic reorientation. Delegating procedures to a committee and a secretary proved insufficient by the 1950s, and soon the emphasis for every member to be a missionary occasioned a permanent staff that has, impressively, continued to evolve with the amazing pace of Latter-day Saint missionary work.

4 Thomas G. Alexander, Mormonism in Transition, chapter 11, “The Church and Its Missions.”